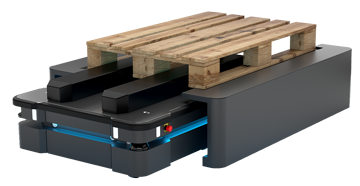 Industry leader’s largest autonomous mobile robot (AMR) can lift 1000 kilos (2,200 lbs), doubling the payload of the MiR500; Customers can now add artificial intelligence capability to all MiR AMRs for improved navigation and the ability to distinguish between humans, forklifts and other obstacles and react for greater efficiency

ODENSE, Denmark, and HOLBROOK, New York – April 8, 2019 – Mobile Industrial Robots today launched the MiR1000, the market leader’s largest autonomous mobile robot (AMR). As demonstrated this week at the Automate 2019 Show and Conference, the MiR1000 can automatically pick up, transport and deliver pallets and other heavy loads up to 1000 kg (2200 lbs) through dynamic environments. Like the MiR500, introduced in 2018, the MiR1000 is a collaborative, safe and flexible alternative to potentially dangerous and expensive fork lifts on the factory floor. MiR is also releasing another industry first—artificial intelligence (AI) capabilities across all of its AMRs for improved navigation.

The MiR1000 joins the manufacturer’s family of user-friendly, powerful and robust AMRs for heavy and light transport that optimize logistics throughout the entire production chain, from the warehouse to the delivery of goods. The MiR100, MiR200 and MiR500 are already installed in more than 45 countries at companies such as Airbus, Flex, Honeywell, Toyota, Visteon, and Hitachi. According to MiR CEO Thomas Visti, MiR built the MiR1000 in response to strong demand from highly satisfied customers of the smaller robots who also want to transport heavy materials such as those in the aerospace and automotive industries.

“With the MiR1000, we are once again extending the possibilities for automating internal logistics, especially for those who want to transport very large materials without reconfiguring their infrastructure,” Visti said. “Manufacturers today must deal with ever-changing customer demands, which means they need flexible and easily adaptable production facilities. Conventional logistics solutions like forklifts and conveyor belts and even traditional automated guided vehicles (AGVs) haven’t been able to support this type of production.

“With the MIR1000 and our other highly flexible autonomous robots, none of which require rebuilding infrastructure or extensive programming capabilities, we have made it especially easy to optimize the transportation of all types of materials,” he added. “Customers have seen that with our other robots and will experience the same efficiencies with the MiR1000 and much heavier loads.”

The world’s first mobile robots with AI take robot navigation to a new level.  With artificial intelligence (AI) capabilities incorporated into the software and strategically placed cameras that function as an extended set of robot sensors, MiR has enabled its robots for optimized route-planning and driving behaviour. The cameras, called MiR AI Camera, enable the robots to detect and recognize different moving obstacles and react accordingly. For example, the robots will continue driving as usual if they detect a person but will park if they detect an AGV so the AGV can drive by. The robot can also predict blocked areas or highly trafficked areas in advance and reroute instead of entering the blocked area and then re-routing.

The MiR1000 has two flexible pallet lifts for the two most commonly used types of pallets: the EU pallet and the 40” x 48” pallet. Like MiR’s other AMRs, the MiR1000 can be programmed via the intuitive user interface, or through the MiRFleet robot fleet management system, which makes it simple to automate new tasks for a company’s entire fleet of robots. The AMRs can also easily integrate different top modules such as pallet lifts, conveyors, a robot arm or other options to support a wide range of applications.
For more information please contact Customer Service at 314 - 731 - 4444 or by email at [email protected]
Related Products